June, the first kiss to the start of summer, June bugs make their ritual comeback, and the crickets chirp in choirs. Summer has officially begun. Though summer offers shorter nights, there is still much to savor after sunset. With school out, staying up late can officially be indulged.

The red carpet appears to be rolling out, for summer is a wondrous season for Jupiter. This June is no exception, so make way for June 2019.

Vision of the Moons

Between June 10-12, Jupiter will be extremely close to the Earth. This particular time frame will be the optimum time to grab binoculars. Jupiter will be showing us its brightest, closest, and most detailed version of itself as it shines from 365 million miles away, give or take millions of miles because there is no true accuracy. Because Earth and Jupiter are closest in proximity during their orbit around the Sun, stargazers will be able to view the four ubiquitous moons of Jupiter, namely the Galilean Moons.

According to NASA, the massive sphere of stormy gas has more moons than dollars in my checking account, with a stellar 79 moons. Four of those moons are extra bright and radiant for telescope seeking eyes. Those four moons are members of the Galilean moons and they are:

The other 75 or so moons are too small for observation and much more difficult to track. Which is why scientists are discovering new moons pretty much as we speak. Moreover, the Galilean moons offer a spectacle during moon transits.

While the Galilean moons of Jupiter satellite the planet, they often orbit with their shadows left behind, hovering over the surface of the giant planet.

To view a transit, use a good transit calendar for date and time and while observing Jupiter, look for a tiny, dark dot drifting over the gas giant’s surface. The dot may disappear for a second but don’t think your mind is playing tricks, because it’s not, you are in fact witnessing a transit. 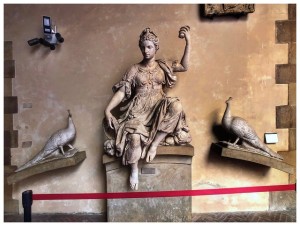 The Mythology of June and Jupiter

The name June is a derivative of Juno, the Roman goddess of marriage and childbirth. She was married to the Greek god, Jupiter. The story of Juno and Jupiter is nothing short of romance and there is always time for some romance, especially when it comes from the stars.

Jupiter covered himself in a blanket full of clouds and was scared to reveal his true self to others. It was Juno, the brave heart, who unlocked his true charm and uncovered his undying ability to love. Yes, miracles do happen, you just have to believe.

Taking a dip into the past with Greek and Roman mythology, we can now dive into the future with one of the many space exploration projects innovated by NASA –Juno the spacecraft. Juno is the key to uncovering the mysteries of Jupiter. History is certainly connected to the future especially in the case of Juno, both the goddess and the spacecraft on a mission to reveal Jupiter’s true charm.

Juno the spacecraft, will help scientists obtain astonishing data to gain depth in the following:

Somehow or another there are signs to signify that we are all connected. Our minds, imagination, intelligence and curiosity make for great discoveries. Knowing more about the universe we live in is an endless and intriguing journey.

For June and Jupiter 2019, we can look up to the sky, feel the history, breath the present and anticipate the future and look forward to spending more time with our glorious skies. Let there be the night.

Even snowmen need a little moisture for their iced lips. ⛄️🍁💕
Woodstock day at school which means I can jam to Blue Oyster Cult and LED Zeppelin ✌🏼☮️
Nature’s spring coil all from the soil 🌱
The bok choy rose... this is a true and beautiful green. Thank you bok choy, you’re the best! 🌷🤙🏼
One lucky customer... ☀️🌻💚🌾👩🏻‍🌾
Trees have eyes and this one likes to watch people order Starbucks from the drive thru 🌳🌿☕️

Even snowmen need a little moisture for their iced lips. ⛄️🍁💕
Woodstock day at school which means I can jam to Blue Oyster Cult and LED Zeppelin ✌🏼☮️
Nature’s spring coil all from the soil 🌱
The bok choy rose... this is a true and beautiful green. Thank you bok choy, you’re the best! 🌷🤙🏼
One lucky customer... ☀️🌻💚🌾👩🏻‍🌾
Trees have eyes and this one likes to watch people order Starbucks from the drive thru 🌳🌿☕️
%d bloggers like this: